Comparison of SIM-Only vs Corporate Plan

I previously made a post comparing the telco’s SIM-only plan against their regular plans. After showing it to many of my colleagues, many were interested to know if the plans were comparable after factoring in the recontract period and corporate discounts. Since MyRepublic just came out with their new plans, I figured that it deserves another look to see which is better (also because 1 of my phone plan is coming due soon).


For this exercise, I’ve prepared some parameters to make it a near similar comparison and all the plans are calculated to Price/Gb/month. This means that the lesser you pay per Gb per month, the more value you are getting.


For those who require less than 5 Gb, Starhub’s S plan is the most value for money followed by M1’s Reg plan. 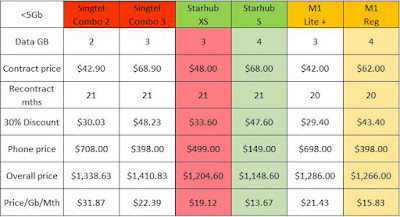 For those who require 5 - 9 Gb, Starhub’s SIM-only S plan is the most value for money followed by Circle.Life’s Corporate base plan (No discount but gives 2Gb more data) and Zero Mobile’s XO plan. Do take note that both Circle.Life and Zero Mobile does not include SMS in their plans. You can purchase them separately if you require.

For those who require more than 20 Gb, Singtel’s 55Gb and 30Gb plans took first and third place in terms of value and M1’s mySim(e) 90 took second place.

To compare unlimited data, I assigned 100Gb to each plan to calculate the Price/Gb/Mth. With the results, M1’s mySim(e) 118 and mySim(3) 98 took first and third place respectively and Zero Mobile’s X plan took second. I did not consider Zero1’s plan although it is cheaper simply because the speed is throttled down after the first 3Gb. This means that you get 4G speed for the first 3Gb and after that, the speed is reduced.
It is also important to know that while M1’s plan is also unlimited, their speed will also be throttled down if you are deemed to have excessive data usage which exceeds their Traffic Management policy (customer service was unable to provide an exact number). Meanwhile, Zero Mobile’s X plan allows only 1 registered device to use their data. This means you cannot use your phone as a hotspot for others to use. 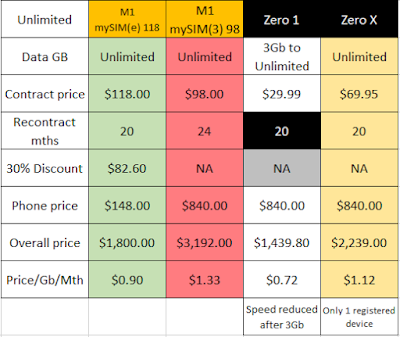 I did not consider combining DataX Infinity and MobileShare from Singtel as there is a limit of 50Gb on top of your Combo 3/6/12 plan. Once you overshoot the data usage, the speed is dramatically reduced to 1Mbps. For those who do not know, Singapore’s average 4G download speed is 44.31Mbps according to an article here. Hence, a drop to 1Mbps makes the plan basically useless.

The above data is correct as of 23 Jun 2018. Any updates on the plans will be corrected here as and when necessary.

Investing Wolf
Disclaimer: This is not a recommendation to buy or sell any mentioned stocks or securities in this blog. The above is all my own opinion and no one else’s.